Baseball has always been one of our most popular centerpiece themes for do it yourself Bar Mitzvah, Bat Mitzvah, sports banquets, theme parties and even wedding rehearsal dinners and receptions. 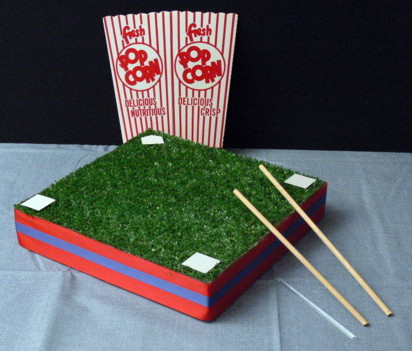 Do it Yourself Baseball Centerpiece Kit

Shown to the left is our featured baseball infield “kit”. Add from our enhancements or supply your own.

Kit consists of: 12″ x 12″ Styrofoam base (ribboned in your choice of colors) artificial grass glued and trimmed, four bases cut out and glued on base, popcorn box and 2 wooden dowels. Assembly and gluing of popcorn box, and dowels not included – $15.00 each.

Available unassembled to save you more – $10.00 each Ask for details.

Major League Baseball Teams We Can Feature For You