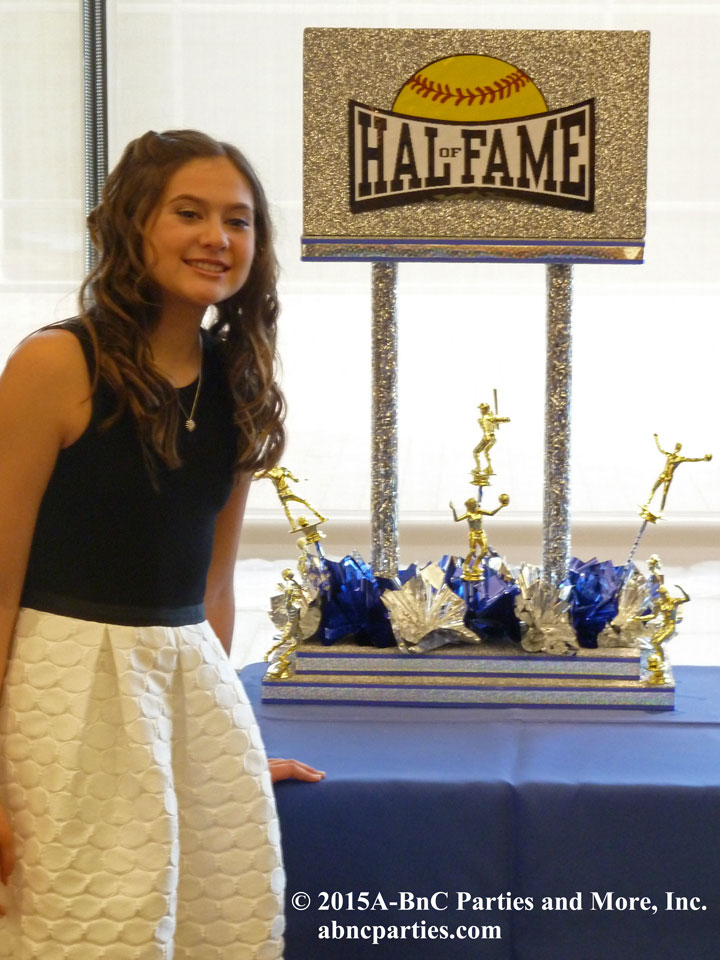 Last weekend we were delighted to do a buffet table centerpiece for Halle’s Bat Mitzvah celebration party in Deerfield, IL. As a note, we actually did the centerpieces for her mother’s wedding rehearsal dinner. Imagine that!!! What an honor.

We talked about what they wanted. Both agreed they wanted something tall. They also knew they wanted to use a logo a their friend had designed for the party. They were using the same logo at various places at the Bat Mitzvah.

The logo had a play on the words “Hall of Fame”. The Bat Mitzvah girl’s name is Halle so the logo incorporated “Hal of Fame”. The logo was designed with the words “Hal of Fame” along with a white softball coming out of the top of the name. The grandmothers wanted the ball to be yellow with red stitching for the buffet centerpiece, which we changed as requested.

The grandmothers also wanted the centerpiece raised so we used two bases on the bottom. This would help raise the centerpiece so it would not be hidden by the food on the buffet table. (They still placed the centerpiece on some milk crates covered with tablecloths.) I made the upper base smaller which gave it a more aesthetically pleasing look.

I used two 24” flexible plastic tubes to raise the entire centerpiece high. Silver shred was added in both flexible plastic tubes. Both tubes were connected to another piece of Styrofoam I used as the upper base on which I would mount the logo. To support the logo I cut one last piece of Styrofoam wider than the upper base but matching the length of that base.

Both sides of this last piece of support Styrofoam were painted silver and then glittered silver. It was secured wide side up onto the base at top of the two flexible plastic tubes. I enlarged the logo to fit, printed and laminated the logo. Then I trimmed the excess lamination from the logo and glued it onto the glittered Styrofoam.

For the reverse side I cut Halle’s name in 5” individual letters. I painted and glittered them blue. These letters were then glued onto the reverse side of the logo in an interesting arch design.

The grandmothers designed the Bat Mitzvah table centerpieces using trophies showing girls doing various sports. We were given some of these trophies to use on the buffet centerpiece. I placed the trophies artistically around the base of the centerpiece at different heights using dowels. Then I added mylar paper poofs to give color as well as to hide the mechanics of the centerpiece.

We delivered the centerpiece to the party and the grandmothers loved it. Halle, the Bat Mitzvah girl, was surprised to see it and could not decide which side she liked better!!! Halle is seen posing with the centerpiece.