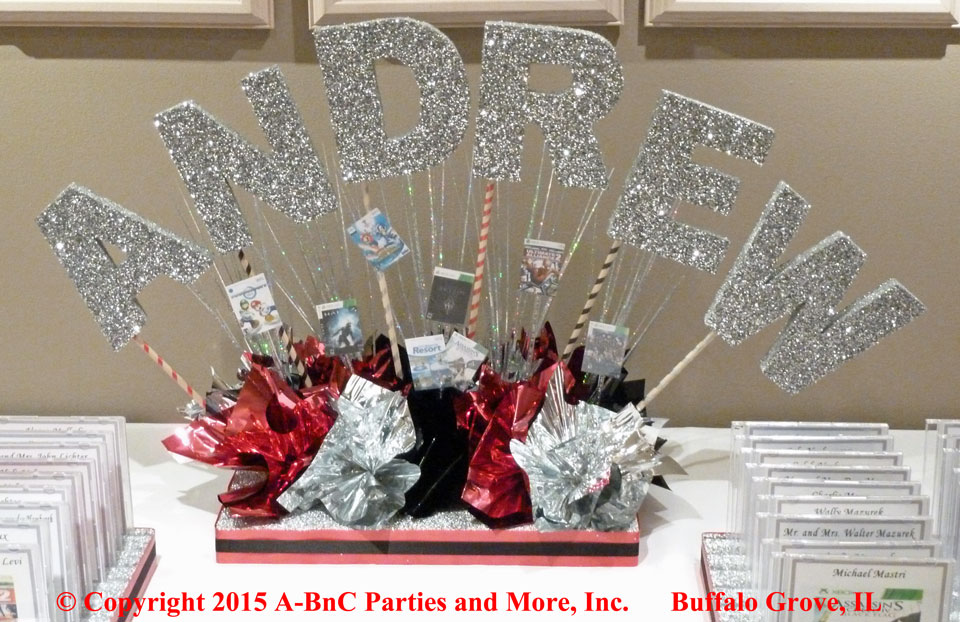 Today I will tell you about the details determining name centerpiece for a place card table. Let’s first rewind a bit to Sandy’s Bar Mitzvah party which was to be held at Ravinia Green Country Club in Riverwoods, Il.

Sandy had decided on the Wii game theme Bar Mitzvah party centerpieces for her son’s event. She had also decided upon having a custom place card and CD case giveaway based on the same Wii theme to is how guests where they were to be seated. Sandy next decided she would like some additional decorations for her son Andrew’s Bar Mitzvah party place card table as the time drew closer to the event.

Sandy use of CD cases as place cards mounted on Styrofoam bases meant there would be a lot of room on the table for a theme centerpiece. We discussed what Sandy would like on the centerpiece. Although she did not exactly know what she wanted, she did know she wanted her son’s name in glittered Styrofoam letters. That was an excellent choice! Glitter always adds a lot of fun to any centerpiece or event.

We cut Andrew’s name out in block letters then painted and glittered them with silver glitter. We strongly recommend block letters since they are sturdier than script. When shipped or assembled they are much less prone to breakage.

A 24” x 12” piece of Styrofoam was used as a base. Wooden dowels helped to raise the glittered Styrofoam letters above the base. Alternating the length of the dowels maked the letters form an attractive arch. Because there are six letters in Andrew’s name I waited to glue in the A and the W until after we arrived at the party. It was insurance that nothing would happen to the fragile letters during delivery of the centerpiece to the party in Lincolnshire.

Colorful black, silver and red mylar paper poofs and theme colored ribbon were added. This contributed to some much needed color on the place card table and centerpiece.