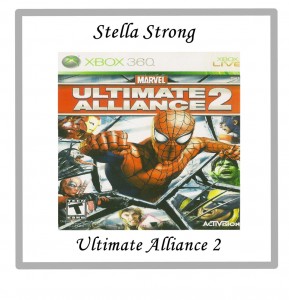 The plans and details for Sandy’s son’s Bar Mitzvah party at Ravinia Green (in Riverwoods, IL) were coming together nicely. It was now time to concentrate on the place cards for the guests. Sandy wanted something different to go along with the Wii game theme.

She also wanted to have something the kids could take home as a give-a-away and remembrance of the Bar Mitzvah party.

We both thought about what that something could be. We came up with an idea about a CD. The CD would have the same design as the Wii game to be used on the respective centerpieces and tables. Each guest would get a CD case with their name on it and the same game cover as the centerpiece of the table where they would be seated.

I designed the combination custom party place card and CD cases to have the guest’s name and the game name on the Wii game cover (see image). The name of the game would indicate the name of the table where the guest(s) would be seated.

The printing was finalized. Then the size of the custom party place card and CD cases had to be determined. It had to fit in the CD case just right or it would not look right. Once I finalized the size of the insert for the CD case I printed and cut out all the CD place card inserts. I then inserted the final image into the respective CD case.

Each of the kids got a gift certificate. It was put into the CD case and was their take home prize and remembrance of the Bar Mitzvah party.

The last thing left to do was to put all the custom party place card and CD cases in alphabetical order. Then on the day of the event they could just be put out on a table.

The combination custom party place card and CD cases were useful in two ways. First they enabled the Bar Mitzvah party guests to find their table. In addition they were also useful after the party for the guests to use for their own CDs.