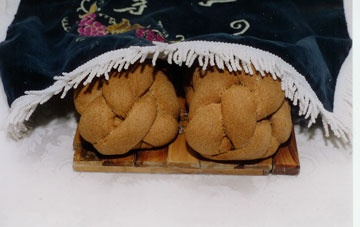 Challahs For Blessing Of The Bread

I first met Sandy when she visited our show room with a friend of hers. I was working with her friend on her son’s Bar Mitzvah party celebration.

Later it was Sandy’s turn to plan her son’s Bar Mitzvah to be held in Riverwoods, IL. She called and asked me if I was available for her date. I was and we met to talk about all the details.

Sandy ordered her invitations. We also planned the centerpieces, a sign in board and a special centerpiece for the place card table. Her mom works for a company and does all the day of event coordinating of parties for their special events. Sandy said her mom would be coordinating the day of the event for her grandson’s Bar Mitzvah. She was very excited to do this as a special gift to her daughter and grandson.

About three weeks before the Bar Mitzvah Sandy’s mother became ill. She had to be admitted to the hospital. Sandy’s mom’s only concern was that she would not be able to fulfill her promise to oversee at her grandson’s Bar Mitzvah.

Sandy called me and asked if I could take over for her mother as the day of event coordinator doing what she had planned to do. I said I would be happy to help out and we arranged a meeting.

Sandy’s main concern was that the catering manager was not very receptive to her wishes. She wanted me to make sure that all the details were followed to her liking. Sandy’s father had a very strict dietary requirement for his supper. Sandy said making sure that his meal came out correctly was her number one priority.

In addition to her father’s special dietary request there were several children who needed special meals. Normally the children and adults do not get their food at the same time. So it was critical the children with the special request get their food at the same time the kids were served. It was also critical Sandy’s father get his food when the adults were served.

I was able to ensure these details happened as expected. These are just some of the normal duties of a day of event coordinator.

Sandy further requested to make sure the challah was available for the blessing, which I was able to do. A challah is a special Jewish braided bread. It is eaten on the Sabbath, at holidays and other celebrations. A special blessing is recited over the challah by an honored guest prior to beginning the meal.

At the end of the evening Sandy was very pleased that everything turned out perfectly. She was also glad that her mother was able to attend her grandson’s Bar Mitzvah. Her mom was able to enjoy herself without having to worry about any of the details as a day of event coordinator.

Everyone was happy and Sandy even said she would be calling for her other son’s Bar Mitzvah in two years!