I first met Rachel (not her real name) several years ago when we were members at the same synagogue in Buffalo Grove, IL. We became friends. We would not go out socially but we were friendly enough that we were cordial to each other. Whenever we met at events and gatherings we were happy to see other. 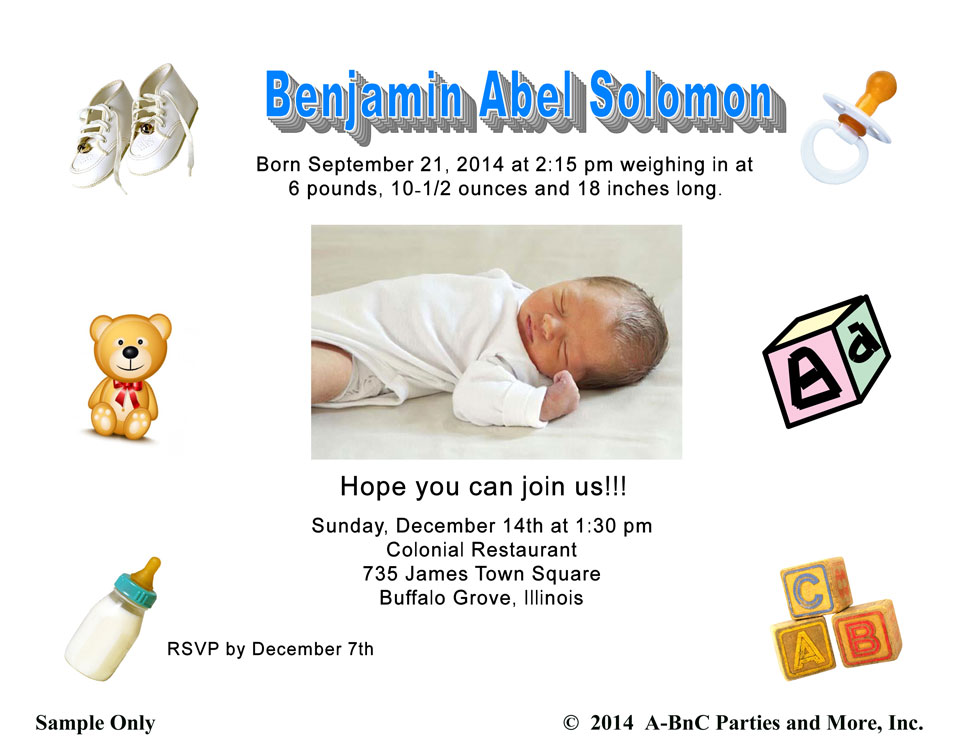 When her son was having his Bar Mitzvah she called me to help her plan his event. I was very happy that Rachel chose A-BnC Parties and More, Inc. to help with his party. Planning and decorating Bar Mitvahs and Bat Mitvahs and other events is part of what I do through my company.

Recently Rachel called me to tell me she had become a grandmother! I was very happy to hear her news. Her daughter gave birth to a baby boy named Michael.

Rachel called and asked if I could once again help her plan a party. She wanted to announce Michael’s arrival to her friends and family. I said of course I would be delighted to help her.

We made an appointment. Rachel came to my studio to discuss what we could do for the party.

First of all she wanted invitations. They had to be special and include her grandson’s picture on the invitation.

I designed the invitation with Michael’s picture prominent on the invitation. The picture was surrounded by baby graphics. I had a baby bottle, baby shoes, a pacifier, a teddy bear and baby blocks.

I made sure that all pertinent information about the Buffalo Grove (IL) party was on the invitation. This included where the party would be and what time it would start. I had the phone number for guests to RSVP to Rachel. They could tell her if they were available to attend or not.

This was the first notice people would get about Michael’s birth. So we included Michael’s pertinent information. We listed the date he was born, how much he weighed and his length at birth.

I gave a final copy of the invitation to Rachel for her approval. She was very pleased with the outcome.

Nothing to do now except to wait for the responses!