I found a picture that we did of a custom laminated gymnast cut out. This is a follow-up to our blog article on the custom gymnast centerpiece cut out that we published last month. 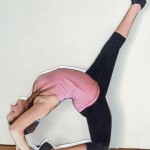 Bat Mitzvah girl in gymnastic pose made into laminated cut out

The laminated cut out is a picture and a reverse image of that picture that has been cut out and laminated. It is then mounted on a polystyrene custom cut out that is about 1″ thick.

Almost any picture can be made into a custom laminated cut out. The picture to the right shows a Bat Mitzvah girl showing her gymnastic pose. Although this cut out was used on a centerpiece for her Bat Mitzvah celebration, it can be used for any event such as a birthday party, Bar Mitzvah, an anniversary, a retirement party and yes, even a wedding. 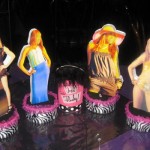 Laminated Model Cut Outs On A Base

Whether to do a custom cut out or a laminated cut out is strictly a personal preference. The custom cut out is best painted so the time it takes to paint the cut out should be taken into consideration. Laminated cut outs are shown to the left from a previous laminated photos blog article. Since they are an image, the picture needs be a good quality image that will not distort when it is enlarged. Skill in cutting out the image also is a big factor if you are a do it yourselfer and want to make the laminated cut out yourself. Also do you have a laminating machine or access to one? All these factors need to be taken into consideration if you want to do it yourself. A-BnC Parties and More, Inc. has all the equipment and supplies so if you are not sure you want to do it yourself….call us NOW at 847-634-6535.